Korean
Struggling with painful sexual intercourse? Contact us for help.

Are There Medications For Vaginismus?

We wish vaginismus had a specific magic pill for a cure — Imagine the possibilities and the loud sigh of relief by the many women from around the globe who suffer from this devastating condition!

But there is a vaginismus medication strategy that can be of help, at times.  Read on. 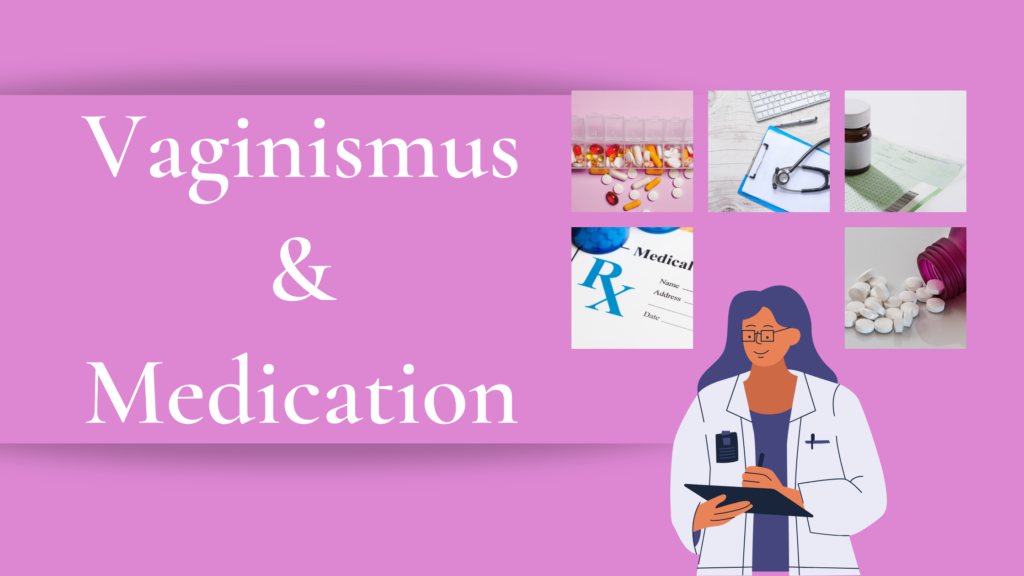 What is The Connection Between Vaginismus And Medications?

Primary vaginismus is a psychosomatic reactionary phenomenon. It is never a stand-alone condition, but rather a symptom of an underlying Generalized Anxiety Disorder (GAD), a Panic Disorder, a Somatic Disorder, Depression, an Obsessive-Compulsive Disorder (OCD), Posttraumatic Stress Disorder (PTSD), or a combination of them.

These conditions are more common than people realize, affecting women regardless of religion, race, educational or financial standing, and are often familial (genetic).  Yet, despite being so prevalent, these conditions are all too often undiagnosed, or untreated.

It is not unusual for us when we address the presence of psychosomatic conditions and the benefit of medication intervention, that many patients will  resist embracing such route because “I can manage it with will power,” or because “I don’t want the medication to change who I am,” or because they fear “I will become dependent on it.”

When it comes to our vaginismus treatment, none of these worries are valid nor true, as the testimonial below describes.  When properly prescribed and managed, medication intervention will pave the way for overall gains in all aspects of the woman’s life, as well as facilitate the vaginismus treatment toward a cure.

Managing the underlying psychosomatic reactions is the connection between vaginismus and medications.

Can Vaginismus be Cured Without Medication?

Vaginismus can be cured without medication when the associated psychosomatic conditions are not as strong, and allow the woman to proceed with the treatment in a positive manner.

To say it differently, not all women need medication for overcoming vaginismus if they are truly successful with mind-over-matter management of their underlying psychosomatic impact.

What types of medications are available for vaginismus?

There are two medication strategies that work well, if the woman cannot proceed with the treatment otherwise.

Note: medication or not, vaginismus treatment intervention is still necessary for optimal results and a complete cure.

How to get medication for vaginismus?

The medication of choice needs to be discussed and coordinated between your vaginismus specialist and your attending medical clinician.  A prescription is needed for obtaining the medication/s, and proper monitoring is a must.

How long does it take for the medication to start working?

The benzodiazepines work within 1.5 hours of intake, and only stay in the system for so many hours.

SSRIs take a few weeks to kick in, depending on the particular medication prescribed, and dosing plan.

Vaginal numbing creams and suppositories do not treat nor cure vaginismus.  All they do is diminish the vaginal sensation during treatment, be it vaginal dilators, finger insertion, or even when trying intercourse.  Vaginismus cure is about being able to use the vagina in the here-and-now without any restriction, not while it is anesthetized or dependent on such.

The purpose of the above-mentioned medication strategy is to control and diffuse the underlying psychological conditions that create vaginismus.  Proper treatment program is still necessary for overcoming vaginismus.

Is it safe to take vaginismus medication while pregnant or breastfeeding?

Taking benzodiazepines during conception, pregnancy, and breastfeeding should ONLY be done by medical advice.  Not safe otherwise.

SSRIs medications intake during conception, pregnancy, and breastfeeding has more flexibility, and need to be coordinated with your medical clinician.

Written by a former patient who was skeptical, until she saw the truth.

“Put on your armor

Taking Prozac is not “giving up”

Before I decided to go on Prozac to fight vaginismus, questions circled in my head like vultures. What if I have debilitating side effects? What if I feel drugged all the time? Does this make me a less independent, less capable woman?

After completing the two-week program at the Women’s Therapy Center in June 2013, I know the answer to those questions is absolute ‘No.’

But a year ago, going on Prozac felt like giving up. I felt ashamed picking up my prescription, barely making eye contact with the pharmacist. I had been fighting vaginismus on my own for five years. I’d seen about a dozen gynecologists, undergone a vulvectomy and hymenectomy, and battled growing frustration, deep anguish, feelings of inadequacy, and doubts about my future.

When Dr. Ditza and Dr. Ross asked me for my “vaginismus story” back in January, they said to include my history of panic, anxiety, OCD, and depression. I fought every instinct to leave that section blank because I knew disclosing the truth would flag me as a patient who would need meds to be treated successfully. And I wanted to do it on my own. But I was also desperate for a cure and unwilling to squander what I knew was my last and best chance. So I was completely candid, disclosing even shameful things like a face-picking addiction—a holdout from acne I’d left behind as a teenager and anxiety I’d never been able to shake.

Not surprisingly, the doctors told me I needed to be “stabilized” at 40 mg of Prozac to ensure successful treatment. I was terrified, even starting at just 10 mg. I remember obsessing over the laundry list of side effects, swallowing the first pill, and waiting for my own personal apocalypse to descend. Was that a seizure coming on? Wait, Prozac can cause an increase in anxiety? In the end, the side effects were underwhelming. I got one vicious headache whenever I upped my dose by 10 mg. I also felt tenser and on edge than usual while adjusting to the meds, especially when driving or sitting still. I was swimming with nervous energy the first month. But there were good changes, too—food tasted better, I was more positive and confident and felt stable for the first time in, well, ever. By April, the initial negative changes were fading, but the good changes were here to stay.

But Prozac wasn’t enough. Dr. Ditza and Dr. Ross also instructed me to bring 30 pills of Xanax to my two-week treatment session. Again, I felt ashamed asking my doctor to write me a prescription, feeling it necessary to assure her I wasn’t a drug addict. I rationalized it by telling myself it was only a back-up plan. But after initial discussions with the doctors, they immediately told me to take a Xanax before coming to my first physical session. I remember fighting the old feelings of inadequacy, of feeling incapable of fighting this alone. But after the first physical session, I was absolutely stunned to learn that my vagina was actually functional!

And it hit me, meds are not a sign of personal failure; they allow you to finally do what you know you must. I learned that there was plenty left for me to do on my own. It was still extremely hard work, mentally and physically, and I felt hugely satisfied and empowered afterward.”

Think of it this way: You’re going to battle with vaginismus and Prozac is your armor. So is Xanax. Wearing armor is no detriment to your fighting abilities. You are still going to need all the willpower and determination you can muster. It just means you’re smart enough to recognize that when all your best instincts and intentions waver in the face of anxiety, your armor has your back, allowing a better, more capable version of yourself to emerge.